On Sunday 8 July, I will be introducing an amendment to a motion in the General Synod in the debates on climate change.

You can read the full motion from the National Investment Bodies (the NIBs) and the background to the debate in my previous blog post.

The words we are trying to change are these:

e. urges the NIB’s to engage urgently and robustly with companies rated poorly by TPI and, beginning in 2020, to start to disinvest from the ones that are not taking seriously their responsibilities to assist with the transition to a low carbon economy.

The words of the Oxford amendment are:

e. urges the NIBs to engage urgently and robustly with companies rated poorly by TPI and, beginning in 2020,  to divest from any fossil fuel company which is not on an unequivocal path by 2020 to aligning its business investment plan with the Paris Agreement to restrict global warming to well below 2°C;

In the run-up to the General Synod debate on Sunday, a number of people have raised questions on social media or in correspondence. Here are some of them together with my replies. I hope this will be helpful to General Synod members preparing for the debate and for others thinking through this vital issue.

Are you seeking immediate divestment from fossil fuel companies?

We are asking the NIB’s to begin divestment in 2020. This is 5 years after the Paris Agreement and still 2 years away. That gives plenty of time for fossil fuel companies to make serious changes to their plans and intentions. Some are doing so. Many are not. 2020 is a key year when carbon emissions globally need to begin to reduce.

Are you seeking forced or automatic divestment?

Some of the literature from the NIB’s describes our position as forced or automatic divestment. I have objected to this. We are advocating an ethical and principled divestment in which judgement can be exercised in each case by those responsible for our investments.

This is exactly the process the NIB’s have followed previously in divestment from coal and tar sands and have said that they would begin to follow in any case with all fossil fuel companies, though much more slowly.

Are you against the use of fossil fuels altogether?

The Paris Agreement envisages a phased transition in the burning of fossil fuels. Oil and gas still have a place in that transition. So does nuclear power. There will be a bigger role for renewables. The balance needs to shift rapidly over the next 30 years as we work towards a carbon zero world in 2050.

However, the world now has a global agreement on how best to manage that transition and this has to be our guide now both in domestic energy policy and in oversight of our investments.

Is it hypocritical to demand divestment and still use fossil fuels?

We are seeking principled divestment only from those fossil fuel companies which have not aligned their plans with the Paris Agreement.

What is wrong with the present clause in the motion?

The first sentence calls for urgent and robust engagement. But the second part of the clause is neither urgent nor robust. We want to give the NIB’s a mandate to do more than start to divest. As a Church we will need to divest (though with room for judgement to be exercised). This will focus engagement over the next two years.

A low carbon economy is not the goal of the Paris agreement. The world needs to aim for a net zero carbon economy by 2050 to prevent catastrophic climate change.

Do you agree that the NIB’s engagement policy has made great progress?

In general terms the NIB’s do a great job. I support five-sixths of the motion they are bringing to Synod wholeheartedly and the motion has already improved considerably as a result of the dialogue between the NIB’s, the Diocese of Oxford and others. I think the progress on ethical investment and engagement has been really significant and those involved are to be congratulated.

However, we are in danger of confusing two things.

The first is the increase in the level of engagement and activity in this area (which has been excellent).

The second is the actual progress in changing the policies of the fossil fuel companies towards planning for a carbon zero future. There is still a long, long way to go here. In the end, that is how we must judge our divestment/engagement policy.

Should we not simply leave it to the investment experts?

Not at all. The NIB’s are investing on behalf of the Church. It is the Church of England’s ethical responsibility to set terms which govern their activity. Where we invest affects the credibility of the leadership we offer as a church, both in the United Kingdom and globally.

Is this simply about the best way to influence fossil fuel companies?

In the first place divestment and engagement are not alternatives. The NIB’s paper for Synod describes the Oxford amendment’s position as “walking away” from our responsibilities: “Pulling out wholescale and hoping other investors fill the engagement void left by our departure is not, we believe, Christian ethical leadership”.

This is a caricature of our position. We are not proposing walking away. Engagement by the Church and its investment bodies can continue in different ways. There need not be an engagement void if the divestment is managed and led well.

There is a real debate around the best way to engage. I believe the pressure, threat and reality of divestment must be a tool in that debate to bring about short term change.

However, there is a more important and substantial primary ethical debate which the NIB’s have not engaged with in their papers or correspondence. In summary it is this:

The world now has global agreement on the transition pathway to a zero carbon economy. This is vital to prevent catastrophic climate change. This transition pathway depends on a high proportion of current oil and gas reserves remaining in the ground and unburned.

At present, the fossil fuel companies’ intentions are to continue to extract and burn more fossil fuels than the Paris Agreement allows.

How can it be right for the Church of England to profit from the burning of these fossil fuels over and above the transition amounts envisaged by the Paris Agreement?

It’s a good beginning but as the Archbishop of Canterbury said at the Stock Exchange on Monday, it needs to go much further. The horizon for assessment needs to be 2050 not 2030. We need to measure performance against a 1.5 degree scenario, not simply 2 degrees.

I am grateful to the Oxford Martin Institute and the Environmental Change Institute in the University of Oxford for publishing this paper this week in response to the latest discussion papers released by the TPI.

The TPI is an evolving tool. I would love to see it brought into dialogue with the more rigorous Oxford Martin principles.

Update, 7 July: is TPI is looking out to 2050?
Rupert Stuart-Smith, co-author of the Oxford Martin School’s discussion paper on corporate investment for a stable climate said this morning “The Transition Pathway Initiative is actually considering emission reductions until the 2030s. Indeed, they define ‘long term’ reductions as ‘more than five years in duration’.

“That a company has plans to reduce its emissions in line with a 1.5 or 2 degree-consistent trajectory for the next decade says little about its compatibility with limiting global temperature rise to these levels, as this provides no information about its intention to further reduce its emissions after this point.

“Only a company which has a plan to reduce its net emissions all the way to zero can be compatible with stabilising the temperature at any given level. Failing to look far enough into the future means that the crucial question of whether emissions are reduced to net-zero remains unasked.”

Does it matter what the Church of England thinks and does in the wider context?

Absolutely it does. Faith communities globally have a vital role to play in the battle against catastrophic climate change. As the Archbishop of Canterbury said on Monday in his powerful address on the environment:

“Within the predominant faith communities of the world – both Christianity with about two billion people, Islam with about 1.2/1.3 billion – the 85% of human beings who follow one global faith or another (by the way not declining, but expected to rise to over 90% over the next 20 or 30 years). In almost all the faiths there is a common understanding of the responsibility of human beings for creation, what we call stewardship – trusteeship – that we do not own creation: we are responsible for caring for it and handing it on to the next generation”.

Our debate on Sunday has attracted interest from all over the world.

Does the Oxford amendment have wider support outside the Synod?

There is a worldwide divestment movement detailed in my earlier post and in our Synod paper.

Christian Aid published an important and powerful statement on Monday in support of divestment reflecting their perspective on climate change and fossil fuels.

If you are a member of the General Synod please attend the debate and speak and vote in favour of the amendment.  If you are not please contact your Synod members and urge them to do so, and please pray for a debate that will educate, inform and reach good decisions. 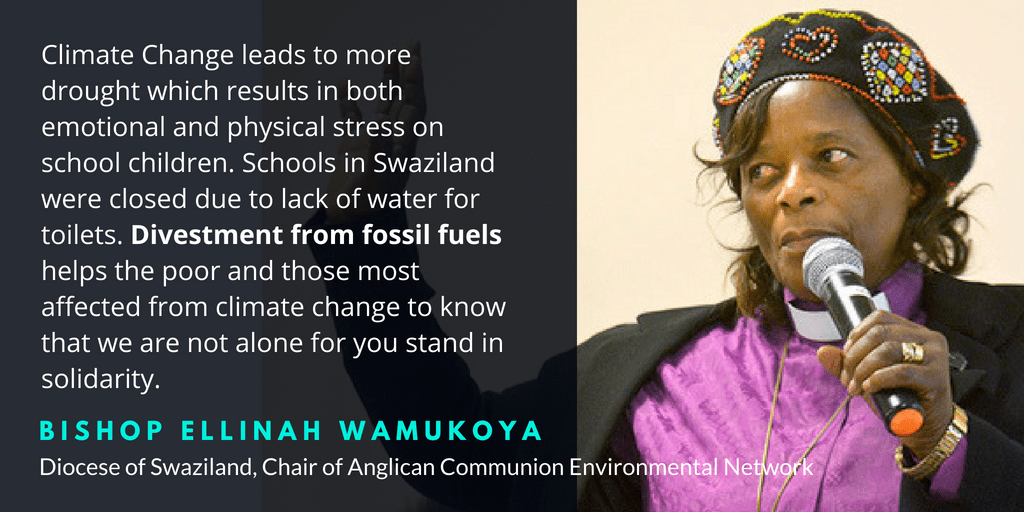 Fossil fuels and the Church 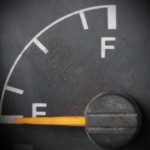 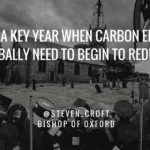 General Synod and the Oxford amendment
Scroll to top