A response to overseas aid cuts

An open letter to MPs within the Diocese of Oxford

On Wednesday November 25th, Chancellor Rishi Sunak announced a temporary cut to Britain’s foreign aid budget, reducing spending in the coming year to 0.5% of national income. The Rt Revd Dr Steven Croft, Bishop of Oxford, has written to MPs within the Diocese of Oxford.

Following the Chancellor’s announcement in today’s Spending Review of a ‘temporary’ reduction in the international development budget, I am writing to all Members of Parliament representing the three counties of Oxfordshire, Berkshire and Buckinghamshire which make up the Diocese of Oxford. I write out of deep concern for the devastating impacts that this change will mean.

This action undermines reassurances given previously by Ministers on the floor of the House of Lords to honour the 0.7% of GDP commitment. There is no assurance of when 0.7% will be restored. While I fully acknowledge the scale and complexity of the challenges the government now faces, we remain one of the richest countries in the world. Britain benefits from infrastructural and economic resilience that too many of the world’s poorest countries and communities lack. Cutting our development spending will heap a disproportionate extra load onto nations already overburdened by debt, poverty, and other developmental challenges. The World Bank estimates that up to 150 million people now risk falling into extreme poverty through the effects of the pandemic effectively wiping out all of the development gains of the last 20 years.

The Government’s 0.7% commitment to foreign aid, enshrined in law, is both a tangible and a symbolic demonstration of the values underpinning Britain’s global aspiration to use her wealth and her soft power as a force for good in the world.

As Archbishop Desmond Tutu says, a promise to the poor is particularly sacred. I hope and pray that the independent voices and judgement of Members of Parliament will prevail and that this intention can yet be amended and avoided.

This letter comes with my best wishes and the assurance of the prayers of the Diocese for you in your hugely demanding role.

Responding to the fourth industrial revolution 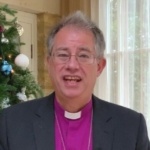 Calling all children – Bishop Steven needs you!
Scroll to top