A sermon for St. Frideswide

Our view of the universe is becoming smaller. One of the reasons is light pollution. There is so much wasted light now in urban and suburban areas that we can no longer see the night sky. We are so blinded by the artificial light that our view of the heavens is limited.

“When I look at your heavens, the work of your fingers, the moon and the stars that you have established; what are human beings that you are mindful of them, mortals that you care for them”.

What happens to our sense of wonder and our humility when we can no longer see moon and stars and planets and galaxies with the naked eye. Perhaps we become blind to the glory of God.

To restore your sense of wonder, you will need to travel outside the city, outside the villages, to one of the few remaining dark places and let your eyes drink in the wonder of the universe.

Spending time in the Church is good. It’s good to pray, to worship, to gather, to study. But when we spend all our time on church affairs, we begin to suffer from a different kind of light pollution. We lose our sense of wonder at all God is doing in God’s world. A different kind of retreat is needed. 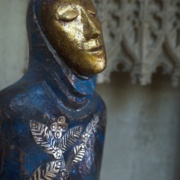 Frideswide is not called into an established monastic house with a recognised rule in an existing town or city. Nor is she called into the remote countryside where no-one lives. Frideswide is a young missionary pioneer, a breaker of moulds. She retreats into the darkness. She establishes a simple community at a crossroads, a river crossing, where she knows there will be people but in a place where there is as yet no settlement and no church.

Frideswide is in new territory. She pioneers a fresh expression of the church. She welcomes both men and women. She is called beyond the life of the court, the life of convention and the life of the Church of her day to begin again from first principles. She travels out into the friendly darkness, to where people are. Frideswide prays. She serves the poor. In the friendly darkness, as it were, she is able to catch a fresh vision of God’s wonder.

There is a beautiful definition of mission, often wrongly attributed to Rowan Williams because he quotes it often. “Mission is finding out what God is doing and joining in”. The original quotation is from John V. Taylor in his wonderful book, The Go Between God.

The saying captures, arguably, the most important lesson the global church was learning in the 20th Century and is learning still in the 21st . It’s captured in the Latin tag “missio dei”: the mission of God. God is at work in and through the whole of God’s world. We see only a part of what God is doing as we see only the part of the night sky. To see more of what God is doing we need to retreat beyond the church, to watch and listen, to find out what God is doing and to join in. I dare to think that this is what St. Frideswide does.

It’s certainly what Paul and his companions are doing when they arrive in Philippi (Acts 16.11-16). Heaven holds its breath at this point in the Acts of the Apostles as the gospel comes to a new continent. Every place Paul has visited to this point has had a synagogue – a natural starting point. We know from Romans that Paul’s very mission is continually to go where Christ has not yet been named (Romans 15.20). Paul the missionary continually travels beyond the church to discover afresh what God is doing and to join in. So what is God doing in Philippi: a place with no synagogue; in a different continent. Will the Spirit still be at work so far from home?

It takes a few days for the eyes of the team to become accustomed to the friendly darkness, as it were. On the sabbath day they come to the river. They are not retreating into solitude but, like Frideswide, coming to where the people are.

“And we sat down and spoke to the women who had gathered there. A certain woman named Lydia, a worshipper of God, was listening to us; she was from city of Thyatira and a dealer in purple cloth. The Lord opened her heart to listen eagerly to what was said by Paul”.

The Lord opened her heart – a powerful and beautiful phrase. Lydia and her household were baptised. The Lord has been at work already. Paul is symmetry joining in what God is doing. Then in a beautiful intentional symmetry, perhaps echoing Martha and Mary, the opening of Lydia’s heart leads to the opening of her home:

“If you have judged me to be faithful to the Lord, come and stay at my home”.

When we dare to go beyond the life and light of the Church, we begin to see new things as the light pollution fades. We see that God is at work richly in human lives already. We discover spiritual hunger and thirst for meaning which is sometimes hidden in the life of the congregation. We see the wonder of the gospel through new eyes. We learn as Frideswide did that God graciously answers prayers for healing. We sit with the poor and we learn from them. We discover that the people God is calling do not fit our stereotypes. In Philippi the Church is established around the households of a wealthy single migrant woman and a suicidal gaoler.

St Frideswide is a radical in our midst. This city and diocese grew up around a place of prayer, where God was at work. The first church on this site was founded by a pioneer who retreated from the church and retreated into the friendly darkness, who discovered and rediscovered the wonder of God at work.

In all of this St Frideswide follows the pattern of Christ who continually breaks out of the circle of disciples to call unexpected others and the pattern of the missionary Spirit who calls and guides St Paul to preach where Christ has not yet been named.

We discern a calling in our generation to be a more Christ-like Church in this place: more contemplative, more compassionate and more courageous. Part of our calling will be to retreat in mission away from the life of the Church. We need to attend to what God is doing in contemplation; to sit with those who are like sheep without a shepherd with compassion and with courage to discover what God is doing and to join in.

May the prayers of Frideswide and all the saints assist us in God’s mission. 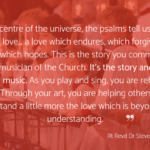 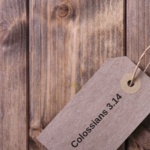 Clothe yourselves with love
Scroll to top