Ed Sheeran released his third album, Divide, a few weeks ago. It went straight to Number 1 and 2 in the download album chart (there’s a deluxe version which costs a bit more). Just about every song was in the top fifty singles the following week.

The most unlikely song on the album (and my favourite so far) is ‘Supermarket Flowers’. It’s a tribute to the singer’s late grandmother and describes the simple actions and feelings and emotions which follow the death of someone we love:

“I took the supermarket flowers from the windowsill

Threw the day old tea from the cup

Packed up the photo album Matthew had made

Memories of a life that’s been loved.”

We live in a culture which finds it hard to think about and talk about bereavement and death. Yet grief is a universal experience. According to the Times columnist Alice Thomson, we need to learn to talk about death (Comment, 8 March 2017). She quotes a new book by the psychotherapist Julia Samuel, Grief Works. According to Samuel, four out of five people never discuss their own death, half of all couples have no idea of their partners end of life wishes and a quarter of GPs are reluctant to discuss death with their patients.

The very centre of the Christian faith addresses the universal mystery of being human: the wonder of the gift of life and the terrible finality of our death and the death of those we love.

We will tell again in the coming weeks the most profound and beautiful story the world has ever known: the story of the most perfect life ever lived followed by a terrible and undeserved death. We will remind one another of the awesome truths we hold to as Christians: that the death of Jesus on the cross was for our sake; that death could not bind or hold the beautiful life of the Son of God; that on the third day Jesus rose again; that through Jesus Christ the offer of eternal life is open to all.

In this season of the year we all need to dwell in this story so that the story comes to live in us more fully. We contemplate the mystery of God’s love in Christ so that we can live our own lives well, with compassion and with courage even in the face of death and bereavement. We have a calling in a world which cannot speak of death to give a tender witness to this powerful message of life and hope.

That story and that hope lives still in our wider culture, sometimes just below the surface. In the words of Ed Sheeran’s song:

“Hallelujah . . . Spread your wings and I know

That when God took you back, he said, 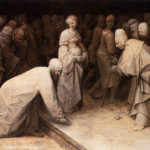 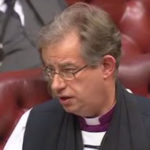 A week in the House of Lords
Scroll to top