What was achieved at the General Synod this weekend?  Everyone is trying hard to find a way forward.  Lots of time was given to facilitated group work on Saturday and to the debate today.  As you may have seen from the news reports, there was a substantial majority in favour of moving forward on a basis of what was an enhanced Option 1 in the original paper (called variously during the day Option 1.5, 1.7 or 1.75).

The official Church of England press release following the debate is here:

There are also audio files here if you want to listen to the debate though I wouldn’t recommend them!  The debate was important but also very dull.

Synod was not unanimous on the wording of the motion and debating the various amendments took several hours.  However there was, I thought, quite deep agreement across the Synod in three important and different areas.

The first was the urgency of keeping going, trying again and re-engaging with a new process.  Many of us are quite weary of this subject from all sides of the debate but there is an acknowledgement that we need to keep at it until we find a way. In its way that perseverance is impressive.  The second was a determination to have a different kind of conversation and process. There was widespread support throughout the day to a proposal from Pete Broadbent, Bishop of Willesden, to set up a Steering Committee for the new Measure which would contain different perspectives and aim to bring something back which could be revised by the whole Synod. There was also widespread support for further use of facilitated conversations.

The third evident agreement in both the small groups and the Synod debate today was in the area of the five fold vision for what kind of Church of England we want to be in the future.  The five points of this vision emerged from the in depth facilitated conversations held in February.  They were owned by the Working Group and then adopted and amended slightly by the House of Bishops.

Although we didn’t vote on it as such today, it feels as though these five points, serve as a key common starting point.  It’s worth repeating them in full.  I would strongly recommend that they are reproduced in parish magazines and newsheets across the Church of England in the coming days and widely discussed and debated.  Synod will return to debate them in the coming months and for the present they seem to carry substantial support.

The debates today were not about whether we should do all of this but how and by what balance of legislation and other provision.The House of Bishops document and Working Party report are here: GS 1886 Women in the Episcopate – new legislative proposals  The five points above are quoted directly from paragraph 12.

Three Processes in One

The next step is that a Steering Committee will be established and will develop draft legislation. However in my view it is important to recognize that there are now three kinds of process going on. Each is important and feeds into the others. Like three strands of a rope we will need all three as we move forward. The first is the continued theological conversation about the substantive issues at stake in terms of the calling of women to the episcopate.  I haven’t heard much conversation at this level over the Synod weekend.  A feature of the last process has been that we largely stopped having the theological and biblical conversation once we had begun the legislative process.  We must not repeat that mistake.

If you’re a regular reader of this blog you will know that I edited a collection of essays with Paula Gooder which was published just before Easter which is designed to help small groups, individuals and parishes to engage with these issues.  It is called “Women and Men in Scripture and the Church” (Canterbury Press). It will be vital to move forward a process of theological conversation and education to undergird the debate (and the change which will eventually come).

The second is the mediated conversations aimed at helping us to understand each others positions better, to be reconciled to working together and being part of one church into the future.  A good beginning has been made here though the facilitated conversations on Saturday were undoubtedly extremely difficult for some.  These conversations continue and need to deepen. We have a small group working to design an indaba type process for the Diocese of Sheffield on this issue in the autumn and I suspect other Dioceses are taking similar initiatives.

However we must not and cannot disguise the fact that through our Synodical processes we are also called to a process of discernment about ways forward which are ultimately determined (humanly speaking) by votes cast at the end of a long process of debate.  Everyone on all sides of the debate needs to remember that reality even in the midst of theological exploration and mediated conversations.  It will also be vital to continue to organize, to marshall support, to campaign, to plan and think ahead.

It is helpful I think to keep these three different processes in mind as we move forward. They are not alternatives.   But they are also quite distinct from each other.

May God lead us and guide us together to find a clear path to fulfill the vision on which we are (almost) agreed.

I like the 5 point vision for the CofE but point 1 should be modified, "The Church of England will be fully and unequivocally committed to all orders of ministry being open equally to all, without reference to gender or sexual orientation".

The Seven Disciplines of Evangelisation: a discussion paper 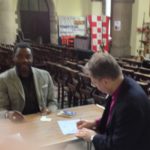 Give us this day….an antidote to greed?
Scroll to top