Whilst there are a lot of negatives about the current lockdown, and I wouldn’t want for a moment to minimise the difficulties, whether mental, social, financial or relational, that so many are living through, there are nevertheless some silver linings around as well.

For me, one of those is the walks I am managing to make almost every day. It’s hard now to believe that I’ve lived here almost twenty years and that I hadn’t discovered the delights of Bladon Heath with its wonderful bluebells and Roe and Muntjac deer, or the superb views from Spring Hill, up above Begbroke, looking out both over the dreaming spires of Oxford and giving a glimpse of almost all the deaneries of the Dorchester Area – which is a great incentive to pray for them.

Of course, the weather has also been a great help and the sunshine of the last week was fantastic. I can feel a lightness in my step when it’s warm and when there’s a wind behind me. All very different when it’s cold and wet, and there’s a gale blowing in the wrong direction. Then it’s more a case of forcing one foot after the other.

Imagine for a moment watching Cleopas and his friend walking along the road from Jerusalem to Emmaus. Those seven miles, something over the 10,000 steps so beloved at present, must have seemed very long ones indeed. Even if much of it was downhill, I doubt very much if there was any sort of spring in their step. Their dreams had been shattered. They had hoped that Jesus would be the one to redeem Israel but he’d ended up on a cross. And even when news came from the women of an empty tomb, and a vision of angels, and others confirming that Jesus’s grave no longer had his body in it, this pair couldn’t even summon up the energy to go and see for themselves. All they could do was to leave Jerusalem and get away from the pain and disappointment.

Yet what a difference we would have seen had we been standing in the same spot just a few hours later. The same two figures, now in the gloaming, hurrying back to the place they had been so anxious to leave. If not actually running, in my mind’s eye I see them walking with a firmness to their step, their heads held high, talking excitedly with a whole new purpose to their lives.

The reason, of course, as we know, was that they had been met by, and then come to recognise, the risen Jesus, and for them that was transformative. All of which could leave us with the impression that all was now right with their world and what happened next was a fairy-tale ending and that both of them lived happily ever after. Well actually we don’t know what happened next to them, and it may be a far cry from the reality of what they lived through in the following weeks and months and years.

Certainly, that night they were walking back into danger. The disciples gathered in that Upper Room were living in fear of their lives. There was excitement of the encounters with Jesus, Pentecost, and the heady days of the expansion of the Church still to come – but persecution and martyrdom were to follow rapidly in succession and it strikes me that those twin realities are very much part of our experience as Christians – excitement and joy and disappointment and fear often run very close together. They may not be the exact two sides of the same coin, but they are often the lived reality for many of us. Certainly that is my sense of what is going on at the moment.

We are in Eastertide, celebrating quite properly the joy and power of the Resurrection Season. Christ is risen from the dead. Death has indeed been conquered and there are plenty of reasons for proclaiming Hallelujah. I remember too, the words of St Teresa of Avila at this point. I think that they underestimate God’s sovereign ability to do as he wills – but the underlying sentiment is certainly something I see being expressed in church after church at the moment. ‘Christ has no body but yours. No hands, no feet on earth but yours. Yours are the eyes through which he looks with compassion on his world. Yours are the feet with which he walks to do good. Yours are the hands through which he blesses all the world. You are the hands, yours are the feet, yours are the eyes, you are his body. Christ has no body on earth but yours.’

And in that context, as I phone people and Zoom around the place I am very encouraged by the way in which in community after community is experiencing congregations who go way beyond what might have been expected of them, they are resurrection people they always were but they are being given a chance now to express that whether through food distribution and neighbourly care, as they work in partnership with each other, and with others. These are, I believe, exciting times with tremendous opportunities for churches.

Whilst very often we have been told that the digital world and networks meant the end for the significance of physical, geographical communities, the last few weeks have shown very clearly how these two can belong together, and mutually benefit each other. Likewise, in talking to those who have been streaming their services, many clergy have been impressed by the way in which the elderly members of the congregation have adapted to them – and for those technically challenged like myself it will be so much easier when the grandchildren can visit to sort out my problems. But won’t it be great if as a result of this, our housebound members never felt completely cut off from the fellowship of their churches. Resurrection people bringing new life in all kinds of ways.

Yet alongside the excitement are the leaden feet walking to Emmaus. Feet overwhelmed by the present pain and the difficulties of financial insecurity, or bereavement, or sickness that experience of being cooped up and, above all else, I sense, the fear of an uncertain future and the nagging question: ‘When will this come to an end?’ or, to be more realistic, ‘When might things begin to get better?’. Such fears are all too real. They cannot and must not be denied.

But, with them, in the light of the twin realities of joy and sorrow that Christians have experienced these down the centuries, and alongside them comes the footfall of the one who walks with us both in the green pastures and in the valley of the shadow of death, the one who is saying to us now, in the midst of the confusions: ‘When you pass through the waters I will be with you; when you pass through the rivers, they will not sweep over you. When you walk through fire you will not be burned; the flames will not set you ablaze. For I am the Lord your God, the Holy One of Israel, your Saviour” (Isaiah 43: 2,3).

Watch the Church at Home service from Sunday 26 April here.

Repetition of the newness 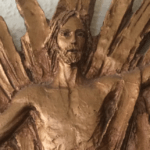 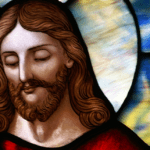 The Good Shepherd
Scroll to top