In Matthew’s gospel, Jesus sets a child in the midst of his disciples and invites them to reshape their priorities. What would happen if we did that today in the public square?

It was good to be at St. Michael at the Northgate on Sunday for the Patronal Festival and to mark 50 years since St. Michael’s became the civic Church of the City of Oxford. The service was attended by the Lord Lieutenant, the Lord Mayor of Oxford and members of the Council. The Bible Readings for Michaelmas were Revelation 12.7-12 and Matthew 18.1-11.

A sermon given by the Bishop of Oxford on Sunday 26 September 2021:

It’s very good to mark today the 50 years in which St. Michael at the Northgate has been the civic Church of the city of Oxford. It is good to express thanks and appreciation to those who have served as City Rectors in that time, including Anthony, and to all those who have served and serve as Mayors, Councillors and officers. Thank you for your leadership and care and especially in the challenges of the last twenty months.

St Michael’s became the City Church in 1971. We are looking back today over fifty years. By coincidence the new ITV series of Endeavour, the Inspector Morse prequel, is also set in 1971: a good reminder of some of the changes over the last two generations. The line that stays with me from last Sunday’s episode is the taxi driver charging 75 new pence for a ride from the station to Summertown.

There have been many changes over that time. Our first reading from Revelation uses the language of war in heaven and describes the conflict between good and evil as a battle.

As we look back we can see that battles have indeed been fought and won. Our city is more inclusive. Town and gown are better integrated, each more appreciative of the other.

Oxford is described by its poorest residents as a compassionate city; a place of safety for the most vulnerable. Women are better represented in our leadership. The church and faith communities work well together. The city has been able to welcome and to integrate into its life migrants from all over the world and to celebrate diverse cultures.

Year by year we welcome students, academics and scientists and help equip them for global leadership in the arts, the sciences and the social sciences. The influence of our city extends across the world.

St. Michael and all Angels is part of this social fabric in its role as a city church: as a place of prayer and worship; in the role of the City Rector as chaplain to the Mayor and Council; as a symbol of our City’s deep Christian heritage; as a witness to the Christian values of integrity, service, humility and safeguarding the vulnerable which flow through our gospel reading.

The Church, of course, makes no claim to perfection: we are often slow to change ourselves; we continually fall far short of our ideals; we are sometimes on the wrong side in these great battles. We are called continually to repentance and to renew our commitment to Jesus Christ ourselves as the only safe foundation of our message to those around us.

Anniversaries are a good moment to look back and measure the journey we have travelled together. But they are also a moment to look forward. What are our hopes for this city as we look ahead now to another fifty years: to the year 2071. What battles lie ahead in the great war being fought in heaven and on earth? What will the Church dare say to the City in this next, uncertain chapter of our life together?

To put the question a different way: if Jesus were to place a child in our midst this morning here in Oxford in 2021, what battles would be uppermost in our minds as we look to safeguard the well-being of that child through the next generation? What needs to change?

Three are uppermost in my mind. I will be interested to know if they match your own.

The first is undoubtedly the battle being fought over the earth’s climate. The world faces twin emergencies of climate change and biodiversity loss. Science tells us clearly that the next ten years will be decisive in that battle and will determine the future of life on earth. Will the child Jesus sets in our midst inherit a world in which all can flourish?

For Christians, we are stewards of God’s good creation. How can our city make a significant, world changing contribution to this great challenge of our age through our policies and example and convening power and the priorities we set? How can this City Church lift up and support the green agenda as part of our God given mission to the city?

The second challenge faced by the child Jesus sets in our midst is one of health and safety and especially mental, emotional and spiritual health. A child or young person growing up today will face immense pressures, many arising from the misuse and exploitation of technology.

COVID has revealed a tidal wave of mental health pressures on the young which has been building for decades. How can our city increase resources directed to the mental, emotional and spiritual health of the young through harnessing the churches and faith communities, the third sector and the health and social services? There is a battle here for investment and of priorities. How can this City Church be an advocate for children and young people as we imagine the child Jesus sets in our midst?

My third challenge for the next generation is the challenge of rising inequality: the gap between rich and poor which again has been revealed and has increased through COVID. Oxford as a city is a tremendous generator of wealth and innovation. The City anchors and will help drive the Oxford-Cambridge arc which will be an engine of the UK economy in the coming decades.

But we are also in danger of becoming a segmented city in which the gap between rich and poor grows wider to the detriment of all. How is it possible for us to become a fairer city in terms of access, health, transport, work and housing? Is it time for a fairness commission which can look at the future of our city through the lens of inequality? How can this City Church continue to set out a vision for justice and fairness for all as a core part of its role as the civic church of Oxford?

There was a war in heaven, says Revelation. As we look back over fifty years we give thanks for battles fought and won and for the role this Church has played in the civic life of this great city. We give thanks for all those who contribute to that civic life today.

But as we look forward we know that there are battles still to come and great resources to meet them both seen and unseen. Christ sets in our midst a little child and challenges our priorities for the future. Together as a city we are called to have a vision for a greener, more sustainable world; for a healthier world; for a fairer world.

We commit ourselves, imperfect as we are, to these great challenges. In this Church dedicated to St. Michael, we too, every single one of us, are called to fight on the side of the angels.

The Robot Will See You Now: Artificial intelligence and the Christian faith 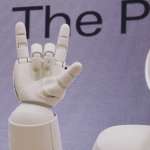 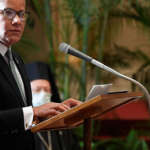 A moment of opportunity and truth
Scroll to top