I hope you have appointments in your diary on Thursday 5th May and Thursday 23rd June.  There are opportunities to vote on both days and it’s vital to use them.

On 23rd June the whole of Britain will vote in a European Referendum.  Whatever your views, this is a hugely significant question.  It will affect the future direction of our country, our unity, our place in the world and our economy.  We all know that opinion polls sometimes get things wrong. The polls are predicting a low turnout on 23rd June on perhaps the most important national question we are facing in many years.   The polls are also predicting that the outcome will be close.  Your vote and mine will make a difference but only if we use it. On Wednesday morning I did what I do every year at this time.  I gathered on the steps of the Town Hall in Sheffield with faith leaders from across the city for a photocall and so that we can make a statement together to encourage everyone we can simply to use their vote: young and old, rich and poor.  No-one has to travel far.  It doesn’t take long.  You can take your family and friends with you and encourage them to vote as well.  Democracy gives to all of us the power to shape our society in the people we elect and in helping us to decide the great questions of our age.

It seems a small thing to go to a polling station, take a ballot paper, place a cross in one box or another and put the voting slip into the box.  Yet for many generations before us very few people were able to vote at all.  To vote you had to be male and wealthy: one of a fortunate minority.  Many people the world over do not live in a democracy and have no say or influence over their own government. We do – yet many of us will not use those votes in the next few weeks.

Having a vote means discovering the arguments: digging below the rhetoric, coming to your own point of view.  The Church of England has set up a web page to help you explore the issue.

Christians should set the pace and take the lead in all of our engagement with politics and many do.  Long ago the prophet Jeremiah wrote a letter to the exiles in Babylon.  You can read the whole letter in Jeremiah 29 but here is the key verse:

“But seek the welfare of the city where I have sent you into exile and pray to the LORD on its behalf, for in its welfare you will find your welfare”.  (Jeremiah 29.7).

In a democracy to seek the welfare of the city means to be involved, to be informed, to discuss and ask questions and above all to use the votes we have been given.  Reserve the dates now.

A Letter from Bishop Steven 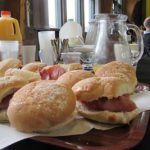