I made a visit to Tata Specialist Steels in Stocksbridge in October.  I met with the senior management team for an overview of the business and then I was taken on a tour of the plant and the steel rolling mill.

It’s only my second tour of a major steel works and, once again, it was an unforgettable experience.  The steel arrives as huge cylinders, newly smelted from scrap metal in the firm’s Rotherham plant, twice as tall as a man and more than twice as wide.

We walked through and over the length of the steel rolling mill.  The cylinders of steel are first heated to high temperature in furnaces, then lifted out by huge cranes and transferred one at a time to the rolling presses.  Enormous force squeezes them into new shapes, like a child working an enormous piece of plasticine.  Each time the metal goes through the press it becomes longer and thinner, up to sixty or eighty metres depending on the order.  The ends are trimmed to the right length and the new piece of steel is then transferred to the cooling racks.

At a later stage these huge pieces of steel will form the raw material for aeroplane parts, car engines, oil and gas drilling equipment, and high end stainless steel instruments.

The pressing was controlled from a hi tech area called a pulpit.  Imagine my delight at the name.  It’s a high tech control tower, high above the steel, where about ten men pass the molten steel from one machine to another with immense skill.

The prophets of the Old Testament spent time in the forges of their day, watching the furnaces and the hammering of metal.  The process of forging iron was a source of wonder then as now.  It became an image of God’s power and also of purity and holiness.

“Is not my word like fire, says the LORD, and like a hammer that breaks a rock in pieces” (Jeremiah 23.29)

These images are important to us and so is our modern steel industry.  Sheffield and Rotherham are known all over the world for the manufacture of steel.  Steel is a vital part of the economy and the history of the region and has shaped who we are.

I learned afresh during the visit that the steel industry faces huge challenges.  The week before I went to Stocksbridge, SSI UK announced the closure of the steelworks in Redcar with the loss of 1,700 jobs.  Just last week, Tata Steel announced major redundancies at its works in Scunthorpe.  The Stocksbridge plant is already reducing its workforce further.  These closures and job losses carry terrible consequences for individuals and communities.

I was impressed by everything I saw in my visit to the Stocksbridge plant.  The management have energy and vision.  The apprenticeship programme is exemplary.  The product is superb.  The workforce is committed and skilled.  There has been extensive investment for the future.

But the steel industry faces global challenges.  The demand for steel in China has dropped so cheaper Chinese imports are flooding the market in Europe.  Energy costs for manufacturers in Britain are significantly higher than in Germany.  This is a very critical time for the British steel industry.

I took part in a debate in the House of Lords on 3 November on energy strategy for the future.  Throught this I wanted to raise awareness that the government need to do something very rapidly now to level the playing field in terms of energy costs for the UK steel industry (the full text of my speech is available here).  Many others are raising similar concerns.

The steel industry is an immense part of our heritage and our economy in this diocese.  Churches need to understand what is happening, support those involved and help their voices to be heard in this present moment.

Many thanks for not being relentlessly negative about our steel industry like so many. 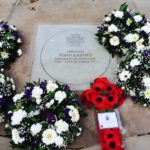 Reform and Renewal: the Noddy and Big Ears Guide
Scroll to top